I finished my 12″ square project, I guess you can call it a sort of sampler. I’ve always thought this was a cute saying  so decided to use it here. I think this is going to stay on the 12″ as it’s frame for the time, at least. If I decide I need it again I’ll come up with something else. Or have Himself make me another one! 🙂

It took me most of the summer to weave the square, not because it was hard, but there were just too many other things going on. Then between trying to chart it out (no, there is no pattern!) and doing the actual embroidering, there went another month. But it’s done now & I’m hunting a place to hang it. 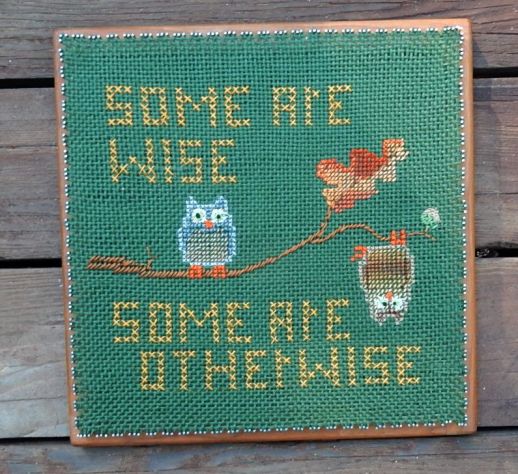 So now it’s back to garden and  weaving for my sweat pants, another long term project. This time because it needs so many of them! I have about 24. I’m afraid to calculate how many I’ll actually need, but I am on my first skein and still have quite a bit of that one left. I knew this would take awhile but I wanted to do it and I have the yarn for a top to go with when I get the pants done. Maybe I should challenge myself to lose weight while I’m weaving these and lessen the # of squares I need as I go! Good idea, I wonder if it would work?

But today I need to take care of this stuff! 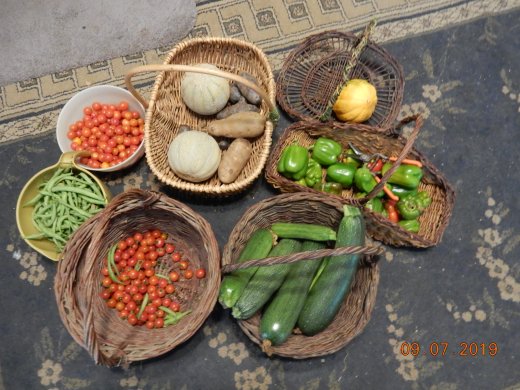 I’ll be loading the dehydrator this morning. I make veg soup mix for winter use. Very handy and can be used for other things, too. The cherry tomatoes will be juiced. I will probably pick this many again tomorrow to add to then. The garden has done well this year. Probably more than we need for two people. This time of year I start thinking we’ll do less next year and then comes January when the seed catalogs start coming in… well, you know how that goes. Sort of like yarn sales. No, I don’t need any more yarn but this is a great price and I’d really like to make this project etc etc. next thing you know … 😀 Well, I only planted two zucchini this year! Next year I will try to restrain myself and stay at one! The peppers were an accident, really. I wanted a six pack but when I got home from the nursery and went to plant them I found there were two plants in each little ‘tub’.  So I could plant one and kill the other or plant them all. What would you have done? I couldn’t bring myself to kill a healthy looking plant. Besides I like peppers so it was a bargain really! And the beans! They have been producing from early on! They are ratty and bug eaten plants but still blooming and making beans! It’s disgraceful! I have canned and eaten and am now reduced to putting some of them in the dehydrator as well. It’s like that 70 some year old woman I read about who just had twins. Just not respectable at her age or the age of these beans! They should be retired by now! I have even thought of euthanasia, just pull them up, but could not bring myself to do it.

And there’s some pretty stuff out there in the garden that I’ll add just for that reason, too!  They can keep blooming, I don’t have to can them! 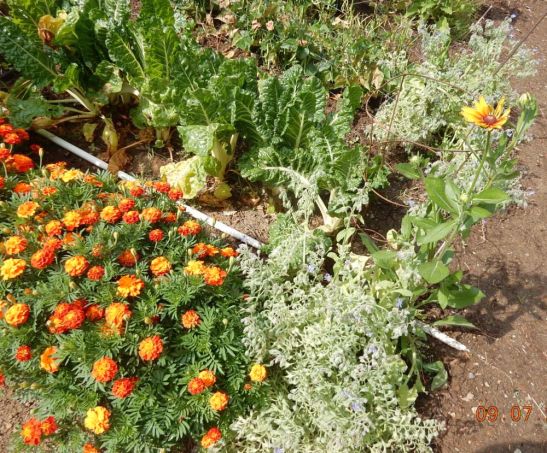 Marigold and borage. It’s little blue stars don’t photograph very well but the bees dont’ have any trouble finding them! There’s  gloriosa daisy in there and the chard in the back ground. That’s keeping us in greens for the long term, too!

The zinnias. There was a butterfly in there but I can’t find it in the photo.

I just like this picture. I have no idea how many of these little pie pumpkins are hidden in there. It’s big patch!

Hope your summer is cooling off and you are getting ready for a lovely autumn! See you in Oregon at OFFF soon!