Yesterday we took a picnic lunch & with dog, headed up Coffee Creek road to Mt. Meadow. The dirt road is 14 miles and dead ends up there but it took a good hour to drive. It’s in pretty horrible shape (county had no $, same story all over) and not advised for vehicles with low clearance. Not that that stops them! It’s the trail head into the Alps and hikers and packers love it. There were Prius’s at the trail head! And it was going home day for hikers and for the resort up there so the traffic was heavy and I guess those guys don’t value their cans all that much. On the ONE lane road as they were driving like it was paved! We tooled along slowly, more or less enjoying the bumpy trip and watching out for on-coming as most of them don’t know how to drive roads of this kind. Their idea of passing on a one lane road is to stop when they see you and let you figure out how to get around without climbing the bank or going over one! But we made it and I hope all them did too. Oh yes, there was another factor in the back woods ‘freeway’ traffice- opening day of bow season. These two photos might give you an idea of the road. But no photo can really show it. 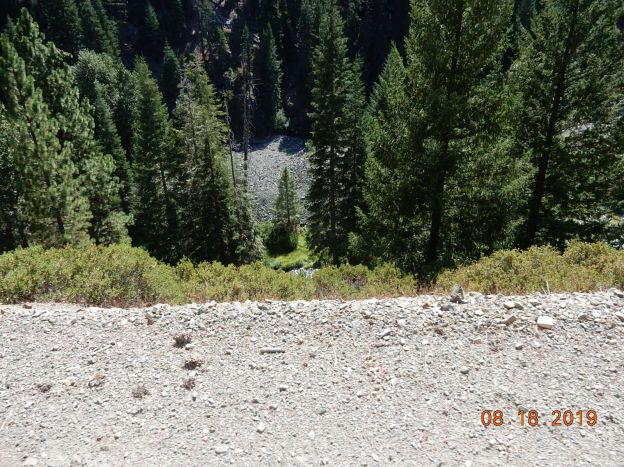 Off the edge. That’s Coffee Creek way down there.

But before the trail walkers started coming back to their cars the campground was totally delightful! The quiet so thick it was almost tangible.  Sis is right, it is not so much just the lack of noise as it is the lack of background noise. The noises we all have grown so used to that we don’t really hear until they are missing. The distant traffic, the lawn mowers & leaf blowers, the electronics and appliances in our houses, we just don’t really hear them anymore. But when they are missing it is very noticeable! The quiet falls softly on your ears. Talk about stress relief! It’s amazing. I just sat and listened. Once in awhile there was a bird chirp, and a breeze came up later adding a soft whisper above. Then around 1pm, as we were were finishing lunch, the hikers stared coming out of the woods. But even with added people noises it was still a lovely day.

We took a walk about the camp ground & down to the meadow. Most flowers were already done and the little  patch of aspens have not yet started to turn. But it’s still pretty. Looking up to the resort & the old historical cabin.

Then while Randy and dog walked down to play in the Salmon River I sat at the table and got out my loom.

Weaving in the Wilderness

I don’t trust my bad knee on that very steep trail but He took pictures. Used to love wading the the stream. Dog enjoyed it!

Salmon river, down stream it gets a bit more rugged.

And the view across the meadow into the Alps is just beautiful, anytime of the year. You can see there is still snow up there. The hikers told us there is a lot more than shows here on the sunny side of the hill. 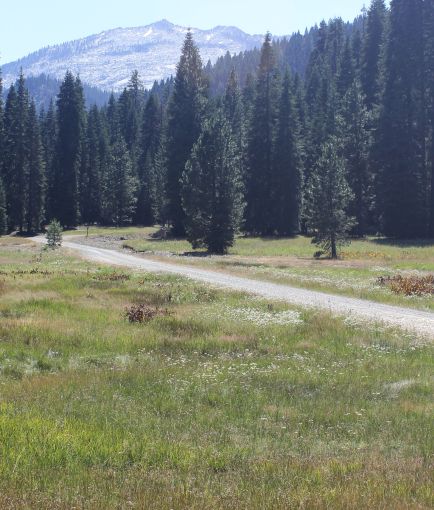 And there are still some flowers blooming in the first meadows.

But now it’s Monday. He’s back to deck building, I’m canning plums, peaches, and zucchini relish. I managed to fit a peach pie in there, too! Dog is snoring in her bed, staying out of the heat & dreaming of that nice cool stream for wading!

Hope you’re finding some cool too!

Today it was blackberries and peaches. The peaches are windfalls but it looks like I need to get out there and pick them as they are falling at a touch. All pretty small as, once again, I did not get them thinned as I should, it’s so hard to pick off those baby peaches! I was hoping I could just pit them and run them though the squeezo but  everything wanted me to peel them, including my conscious. I was pretty sure I’d end up with fuzz in my jam if I did it the lazy way so I peeled. I got 5 pints from the peaches and two & a half from the black berries. I didn’t notice if he took the berry bucket when he went to work on the waterworks today but he’s been gone quite a long time so it’s suspicious!

That brown spot in the background is the basket of peaches. 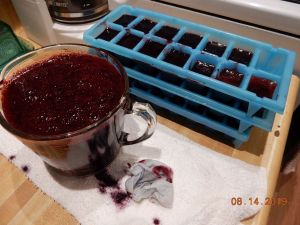 I measured out for a batch of jam and put the rest in ice cube trays to use in my ‘smoothies’. 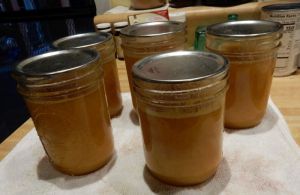 I have never run the peaches though the squeezo before but I am hoping this will give me a more consistent jam. Even using the Pomona it tens to separate doing it the regular way. I end up with chopped peaches on top and peach jelly one the bottom. We’ll see. I didn’t think the last blackberry was going to set up but it did, Sis says Pomona makes it more like Jello than jelly but I don’t have any problem with it. I don’t just use juice, I use pulp so maybe that makes a difference. Or maybe I am just less picky! Anyway, none of this got sugar. The berries were sweet enough without and so, of course, were the peaches.

I’ll probably pick the rest tomorrow but won’t be making jam or canning as the laundry bin is over flowing! Kitchen is cleaned up and it time to start dinner. I’m cooking by a recipe tonight!

It’s been a really busy and fast moving summer now that it’s gotten going! Cabin rental have kept me busy washing sheets and towels! lol We’ve been pretty lucky and have gotten very nice people in. Only one ‘bad apple’ but for the most part it’s been fun meeting people.

And it’s garden season, of course. And as usual everything gets ripe at once making it hard to keep up! Still working in the shop and weaving when I get a few minutes. But the pantry is beginning to fill up again! Zucchini is hitting it’s stride!  lol Made one batch of sweet relish and 18 mini loaves of bread from them and the basket is filling up again! The peaches are just a few days from being ready I’m afraid, wish they’d hold off for a week! And he’s picking blackberries. Made one batch of jam. He also brought me two more bucket of plums, they’ll keep a few days. The tomatoes are getting fat but I don’t think we’ll have a big crop this year, enough to can, I mean after the gopher episodic this spring. Well, It’s cooled off anyway so that make it more fun to be in the kitchen! lol

T-storms mostly went around us but about 1am last night they got close enough for the flashing and booming to wake me up. A lot of o=it was cloud to cloud =, I think. The kind that wounds like it’s ripping the sky apart! But I’m sure there were some ground strikes as well. But we did get a pretty good shower with it, which will help. Still over cast and cool this morning, 80% chance of more t-storms and rain but nothing so far. 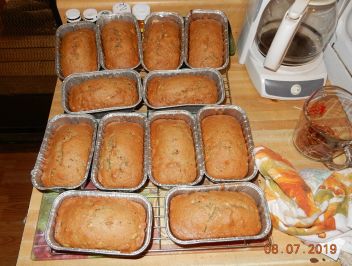 I am weaving but that’s a Secret for awhile. Working on my sweatpants and got some yarn from a Lion Brand sale to make a shirt to go with it. that’s not secret and also is only being worked on it the ‘odd’ moment.

A little hint on the secret.

And this is the yarn for my shirt, eventually! This wasn’t intended to be an Art Shot, but IO liked it so kept it even if it doesn’t give much info. Sorta like the photos we get in knitting magazines. Very nice photography, too bad you can’t make heads or tails of what the pattern looks like!

Weill, Himself is out making looms, which will come to me soon and I have beds to make and things to can so better get off this manchine and get busy! Hope your summer is filled with fun tasks!