It has been an exceptional autumn here, nice sunny reasonably warm weather, and gorgeous colors with the oaks competing with the maples for the brightest! Set off by poison oak and dogwood in reds against the perfectly blue mountain sky.Hope you are enjoying beauty where you are getting the wood shed full and the garden put to bed. Time to dust off your looms and start finding the perfect yarn for winter projects!

Well, we’re home again. OFFF was very …er… interesting this year! That big storm coming in from Alaska arrived just in time to dampen our spirits. Well, those of us unused to those volumes of rain, that is, and especially the gale force winds! The upper Oregonians just put on their designer waders and kept on shopping! lol We did a pretty good business, tho I was sometimes convinced that shoppers just dropped in the get out of the blustering wind and driving rain and stayed to get interested. Which was fine, but in the end we had to fold up what was left of our tent and crawl back into the 5th wheel. The wind got a little too strong and was tearing us up. But we’ll be back again next year!

After the weekend we headed out east ion hopes of visiting Yellowstone Nat’l park if it was not buried in snow by that time. We didn’t get there as you all know by now that everything National got shut down by out dilatory congress unable to made compromises and losing votes by the bucket full. But I try to avoid political discussions so will skip over that here. We did see a lot of eastern Oregon, had a nice two day visit in Pendleton, visited the woolen factory and left some $ there then went on the view several museums and art galleries. Went on into southern Idaho finally getting ahead (or was it behind?) the storm and into mostly clear but still Very Windy weather. Beautiful country but boy am I glad I was not a pioneer! Those people were either crazy or desperate! I’d have stayed in Ohio! lol It would have been awful country when viewed walking at the side of a covered wagon. But we went on though Pocatello and into Utah. Salt lake was very interesting. Salt Lake City is just too big for me! But it got worse for those poor pioneers!  Getting around that huge salt lake and then into the Bonneville salt flats and on to the 40 mile desert. It’s a wonder to me that any of them made it to California. 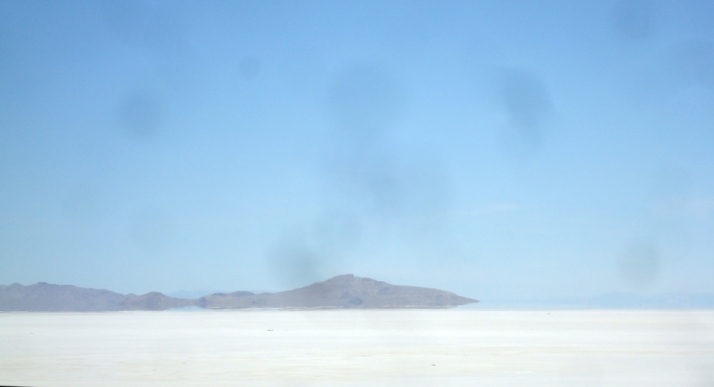 My window needed cleaning, the sky was quite clear and blue and the white… it really is salt… went on for as far as you could see. Those mountains are miles away. That place that looks like a blue hill there at the end of the mountains is really a mirage.  The salt was quite flat and there was no real water.

And then there was this. I think you’ll all recognize this little girl. And the piles are more salt. There were many of those piles. 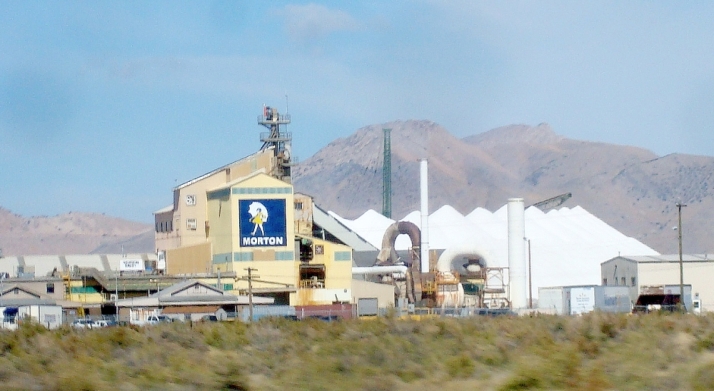 Well, we traveled on across Utah and into Nevada. This was our first trip though norther Nevada but, really, Nevada to tourists, is Nevada, no matter what part you’re in. Well, except for Basin Nat’l monument off Hwy 50, maybe. Took this one on the fly. The last guy cracked an Indiana Jones bullwhip over the last cow just after I snapped this.  It’s going to be hard to see detail at this size. I’m going to print this one up big and frame it.

The story I started off to tell was of meeting another weaver at a way side park in southern Oregon.  She saw our tire cover on the trailer with our logo and asked about the looms. I took her into our little travel home and showed her mine. She liked them and ended up increasing her loom stash there by the side of the road! I hope you are enjoying your new looms, Cindy! I think that was so neat. It’s also nice to know that people do see that logo after all! lol

But now we’re home and after filling orders it’s going to be firewood and putting the garden to bed for the winter. hope you are staying warm!